Computations in masonry structures: From the mesoscale to the super-large / super-complex.

Professor Paulo B. Lourenço recently gave a very interesting online talk on masonry structures within the framework of a Technical Webinar organised by DIANA FEA on 29th September. After a brief general description of masonry materials and all the existing methods currently used to study it, the focus was shifted to recent advances carried out at UMinho. Several topics were addressed, such as:

The full recorded talk is available on the YouTube channel of ISISE.HMS, while a more detailed description of the talk is given below the video.

Masonry structures represent 50% of global built heritage, and even more, if considering only Europe built heritage. Masonry is a composite material with visible units assembled with or without mortar, with how the blocks are assembled playing a critical role in overall resistance. Joints between masonry units control the behaviour in shear and tension of the composite material, resulting in a very low tensile strength of the composite.

Today, built cultural heritage represents the identity of nations and should therefore be safeguarded, while also serving as tourist attractions in historical city centres. Maintaining and extending the life of this built heritage instead of demolishing old buildings is therefore required. This maintenance strategy also complies with sustainable development goals regarding the conservation of raw building materials. Moreover, the growing needs (around +100% according to the US National Academy of Sciences) of housing in the next 50 years makes the renovation of pre-existing built heritage a necessity.

Numerical tools currently used to study masonry structures rely either on micro or macro-modelling approaches. Micro-modelling is based on the description of each unit and joint whereas macro-modelling uses an equivalent composite material, thus reducing the number of degrees of freedom. Homogenisation techniques represent a refinement of this latter method, whereby the behaviour of normally periodic masonry is directly deduced from the behaviour of the two components (i.e. units and joints) through analytical considerations.

Earthquakes represent some of the deadliest natural hazards and are characterised by very complex inputs and analysis. Regarding masonry structures, existing tools are not able to accurately predict their seismic resistance, thus requiring better methods and most probably stochastic approaches due to their brittle failures, as suggested in S4H project plan. Two macro-block approaches were presented in the talk – one with diagonal springs inside the macro-blocks and the other using homogenisation techniques. The adoption of these approaches resulted in a reduction in the computational time of a full seismic analysis of about 36 and 10 times respectively compared to classical approaches, thus making such statistical studies possible. Stochastic approaches are above all required to account for material, damage and geometric uncertainties that exist in the reality.

Analyses carried out by researchers at UMinho on historical and monumental structures were then presented. The goal is to first understand/replicate past seismic failures of buildings, then evaluate the new seismic capacity and eventually propose a strengthening solution.

Lime has mostly been used in historical constructions but is still often used in combination with cement in modern mortar. However, the hardening process of lime through time is not perfectly known and described from a chemical point of view. This hardening process couples thermal, humidity, carbonation and resistance evolution. For instance, it leads to an experimental non-homogeneous and time-dependent stress distribution on a compressed cylindrical mortar specimen. Some analytical models have been proposed to describe these phenomena but still need to be calibrated against experiments, some of which have been carried out at UMinho.

Blast engineering differs from earthquake engineering by the strain rate of the load, which is much higher in blast than in earthquake engineering. It leads to a different behaviour at every scale (from the unit and the mortar to a masonry wall and finally to the entire structure). For example, the strength of masonry units tends to increase with the strain rate starting from a given threshold. However, limited information currently exists for blast engineering as applied to with masonry walls, and much still needs to be properly developed, including appropriate constitutive models for high strain rates. One of the final goals is the formulation of design charts describing the minimum thickness of masonry walls required to prevent their collapse, depending on the intensity of a potential explosion. Another goal is the application to real case studies, along with realistic scenarios of explosion (terrorist attack or industrial explosion) and their associated structural damage, to help to define strengthening or security measures. 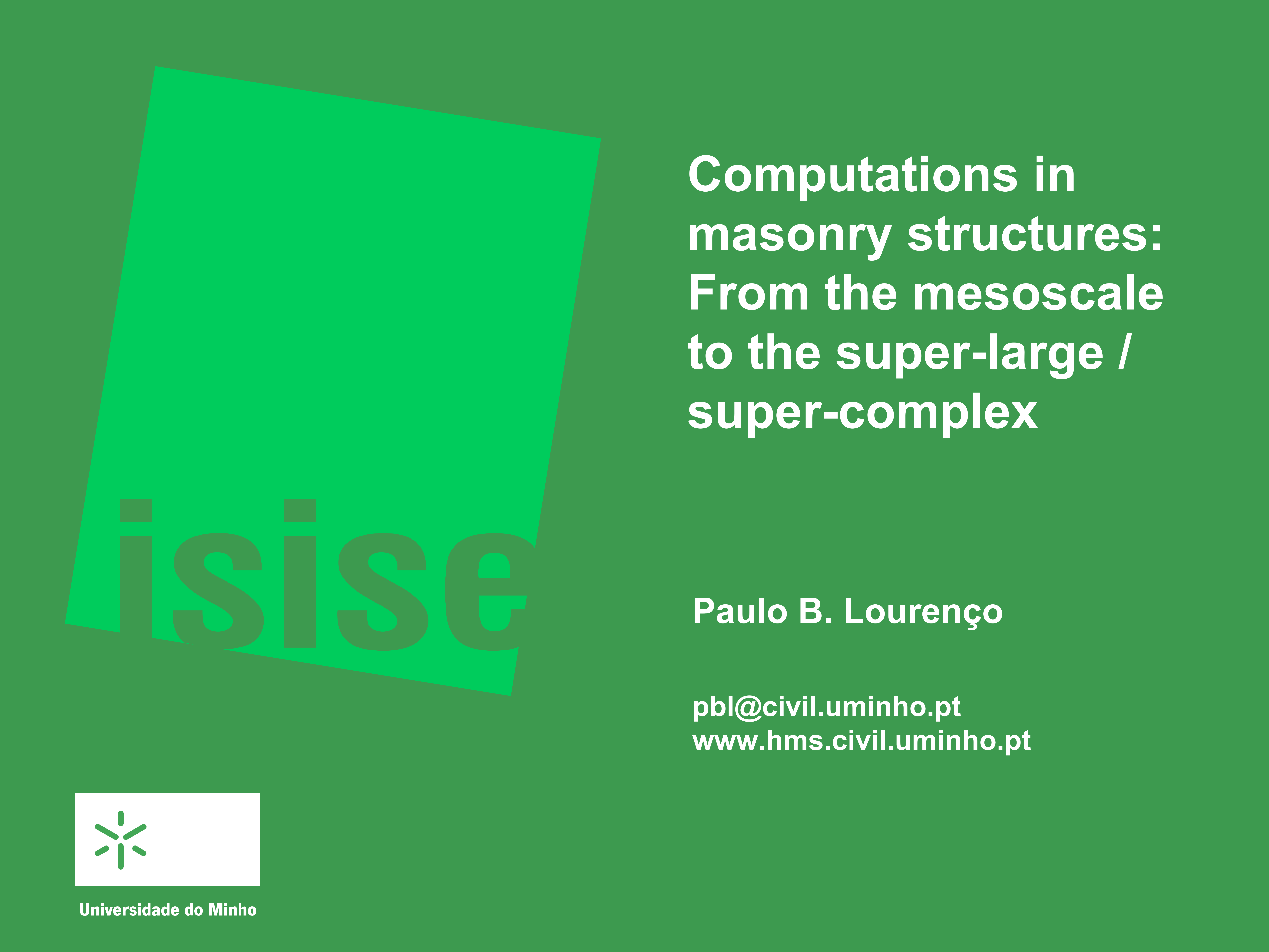 STAND4Heritage ambitiously engages in introducing new standards for safeguarding built cultural heritage for the next generations, which is a major societal demand. Due to its large diversity, the accurate description of the structural behaviour of heritage buildings is still an open issue, particularly when subjected to earthquake ground motions. STAND4Heritage contains an analysis of the seismic signal (WP1), an extensive experimental campaign (WP2), the development and validation of intermediate numerical approaches (WP3) and an integrated analytical tool for the assessment of the seismic capacity of masonry buildings (WP4).

This project is funded by